Well known throughout the world as the definitive Special Forces boat, the FC – Futura Commando – range is used by more elite soldiers and sailors than any other craft worldwide. It is the only craft of its type that has actually been used in combat in different theatres and comes through with flying colors.

This is a result of its unique trimaran FC hull shape designed with removable lateral stabilizers, and various floor system that allows it to carry combatants in a variety of missions. The hull shape is especially important as it can get a large load on the plane as well as give the pilot unsurpassed maneuverability in various and dangerous conditions.

Continually being updated for its ever-changing roles, the FC range is Zodiac Milpro™ most recognizable military boat for Special Forces and Commandos. 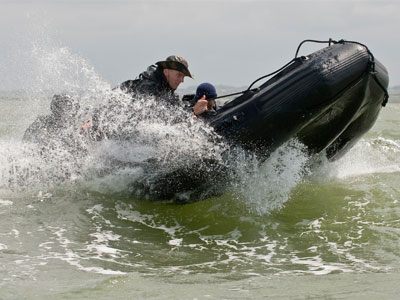